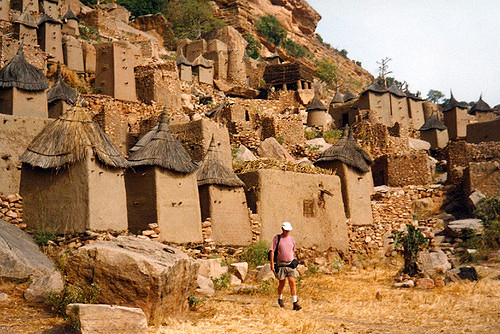 Mali ‘s Dogon country (Pays Dogon) is a world apart . Partly its appeal lies in the Dogon landscape and architecture: here, unique houses and granaries cling to the massive escarpment known as the Falaise  de Bandiagara, which extends some 150 km to the east of Mopti and is 500 m high around Tireli and Ireli. But more than this, a journey through Dogon Country takes you through  a fascinating animist culture with traditions and cosmology as complex and elaborate as any in Africa.

The best way to see Dogon Country: is on foot and in the company of a Dogon guide, and anything from one-day to three-week treks are possible.

The best time to trek is from November to march. Each Dogon village has its own special appeal and the following snapshots ( from southwest to northeast). During the rainy season (June to August), the Dogon Country is wonderfully  green , with waterfalls off  the escarpment